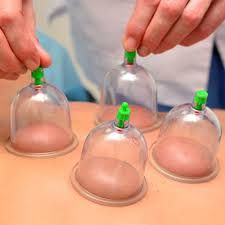 Cupping The Forgotten Therapy
All Praise Be To Allah The Lord Of The Worlds The Living The Absolute Of Whom The Prophet Ibrahim Described “And When I Am Ill It Is He Who Cures Me” (Ash-Shu`Ara` 26:80) And Who Sent Down The Diseases As Well As The Remedies In Order To Teach People To Seek Knowledge And To Place Their Confidence In His Superior.

“The best medicine with which you can treat yourselves is Cupping, or it is one of your best medicines” (Al Bukhari and muslim)
Cupping also known as‘Hijama’ is derived from the Arabic word ‘hajm’ which means ‘sucking’. refers to an ancient practice in which a cup is applied to the skin and the pressure in the cup is reduced (by using change in heat or by suctioning out air), so that the skin and superficial muscle layer is drawn into and held in the cup.

The Great Prophet Mohammed (saw) also advised in about 28 holy instructions. He said “healing is to be found in three things: drinking honey, the blade of a cupper and cauterisation by fire but I forbid my Ummah (nation) from cauterization (branding with fire).” [Saheeh al-Bukhaaree (5681), Saheeh Sunan ibn Maajah (3491)].

What is striking is the complete agreement of the sayings of the prophet mohammed (saw) with modern scientific data and even more so as he was neither a physician nor a scientist. Yet it is unthinkable that a man like Mohammed (saw) who was illiterate could have quoted these instructions.
The publications of many physicians corroborate the regulatory and enhancement effect of cupping to the immune system and also its ability to speed up healing of many diseases. Many have reported the most important action in cupping is the improvement in balance and in the body’s ability to fight against foreign pathogens helping the immune system.

Cupping is the best deep tissue massage available. It has been found to affect the body up to four inches into the tissues, when the cup is left in place on the skin for a few minutes, it draws up the underlying tissues causing superficial local congestion and localized healing takes place through allowing tissues to release toxins, activate the lymphatic system, veins arteries and capillaries.

When wet cupping, a small amount of blood letting is done first, using a sterile blade, and then the cup is applied over the site. This technique is said to promote blood circulation, remove stasis, and alleviate swelling and pain. It is employed especially when there is a toxic heat syndrome and for a variety of acute ailments.

Cupping therapy offers many therapeutic benefits. It has been used for thousands of years to treat painful symptoms e.g. sciatica, back pain, and clearing congestion in the chest which can occur with colds and flu, but has recently gained popularity for its ability to release toxins (i.e. helps tissues to release toxins), enhance blood circulation, stimulate the immune system, and reduce stress as it releases chemicals in the brain that reduce stress and depression.

Anas (radiAllahu anhu) said: ‘The Messenger of Allah (sallallahu alayhi wasallam) used to apply cupping on the two jugular veins and the upper part of the back.’ [Abu Dawood, at-Tirmidhi, Ibn Majah, Ahmad and al-Hakim]

The Messenger of Allah (sallallahu alayhi wasallam) used to apply cupping on three areas, his upper back area and the two jugular veins.’ [al-Bukhari and Muslim]
One of the main purposes of cupping therapy is to encourage a sufficient supply of nutrition to the affected tissues. Cupping is believed to stimulate the flow of blood and lymph to the affected area. Thus it improves blood and lymph flow of the corresponding organ, activates its function and at the same time provides rough clear diagnosis through skin discolouration.

Cupping the corresponding organ points is used in internal medicine disorders to add help to the main stream medicine. Cupping helps in treating disorders such as liver or kidney problems, respiratory diseases, digestive disorders and some gynaecological disorders.

Usamah bin Shuraik narrated that the Prophet (sallallahu alayhi wasallam) said: ‘O servants of Allah! Seek treatment, Allah did not create a disease without creating a cure therefore, except one disease (which is) death.’ [at-Tirmidhi]

Abdullah ibn Abbas reported that the Messenger said, “I did not pass by an angel from the angels on the night journey (meraj) except that they all said to me: Upon you is cupping (hijama), O Muhammad.” [Saheeh Sunan ibn Maajah (3477)].

Cupping can also be used as a preventative medication as seen in the following hadiths.

Anas ibn Maalik reported that the Messenger said, “Whoever wants to perform cupping (hijama) then let him search for the 17th, 19th and 21st day (of the Islamic, lunar month) and let none of you allow his blood to rage (boil) such that it kills him.” [Saheeh Sunan ibn Maajah (3486)].

Anas ibn Maalik reported that the Messenger said, “When the weather becomes extremely hot, seek aid in cupping (hijama). Do not allow your blood to rage (boil) such that it kills you.” [Reported by Hakim in his ‘Mustadrak’ and he authenticated it and Imam ad-Dhahabi agreed (4/212)].

When choosing a cupper ensure they have the right qualifications with insurance and a waste disposal licence as these are prerequisite in the uk.

They also need to use disposable equipment to avoid cross contamination. A lot of people believe that cupping can be painful due to the incisions. If the cup is placed on the area in advance this should makes the area numb, therefore when the scratches are made the pain is very limited. Also if done properly there should be no marks left within a week or two.

Written for Passion Islam by www.alternatetherapy.co.uk